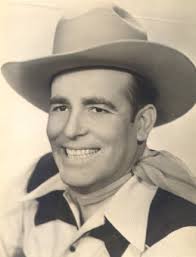 American Western swing musician, songwriter, and bandleader. Considered by music authorities as the co-founder of Western swing,he was universally known as the King of Western Swing (after the death of Spade Cooley who used the moniker “King Of Western Swing” from 1942 to 1969.)

Wills formed several bands and played radio stations around the South and West until he formed the Texas Playboys in 1934 with Wills on fiddle, Tommy Duncan on piano and vocals, rhythm guitarist June Whalin, tenor banjoist Johnnie Lee Wills, and Kermit Whalin, who played steel guitar and bass. The band played regularly on a Tulsa, Oklahoma radio station and added Leon McAuliffe on steel guitar, pianist Al Stricklin, drummer Smokey Dacus, and a horn section that expanded the band’s sound. Wills favored jazz-like arrangements and the band found national popularity into the 1940s with such hits as “Steel Guitar Rag“, “New San Antonio Rose“, “Smoke On The Water“, “Stars And Stripes On Iwo Jima“, and “New Spanish Two Step“.

Wills and the Texas Playboys recorded with several publishers and companies, including Vocalion, Okeh, Columbia, and MGM, frequently moving. In 1950, he had two Top 10 hits, “Ida Red Likes The Boogie” and “Faded Love“, which were his last hits for a decade. Throughout the 1950s, he struggled with poor health and tenuous finances, but continued to perform frequently despite the decline in popularity of his earlier music as rock and roll took over. Wills had a heart attack in 1962 and a second one the next year, which forced him to disband the Playboys although Wills continued to perform solo.

In 1969 he suffered a stroke which paralyzed his right side and ended his career. By 1971 he recovered sufficiently to travel occasionally and appear at tribute concerts and in December 1973 he participated in a final 2-day reunion session with members of some the Texas Playboys to record an album. During this time he suffered another stroke, followed by a more severe one a few days later and became comatose, and the musicians completed the album “For The Last Time” without him. He lingered for five months and died of pneumonia at the age of 70. In 1968 he was inducted into the Country Music Hall of Fame, the Nashville Songwriters Hall of Fame in 1970, the Rock and Roll Hall of Fame in the Early Influence category along with the Texas Playboys in 1999, and received the Grammy Lifetime Achievement Award in 2007.