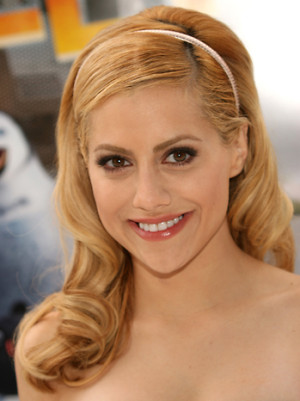 Brittany Anne Bertolotti was born in Atlanta, Georgia to Sharon Kathleen Murphy and Angelo Joseph Bertolotti, who divorced when she was two years old, and Murphy was raised by her mother in Edison, New Jersey. Bertolotti was so estranged from the family that he was not named as the father on the first death certificate. Prior to her enrolling at Edison High School, the family moved to Los Angeles in 1991 so that Murphy could pursue an acting career.

Murphy said her mother never tried to stifle her creativity, and she considered her mother a crucial factor in her later success: “When I asked my mom to move to California, she sold everything and moved out here for me. She always believed in me.” Murphy’s mother is of Irish and Eastern European descent and her father is of Italian ancestry. She was raised a Baptist and later became a non-denominational Christian. She had two older half-brothers and a younger half-sister.

Murphy attended Verne Fowler School of Dance and Theatre Arts in Colonia, New Jersey, in 1982. From the age of four, she trained in singing, dancing, and acting until her move to California at thirteen. Murphy made her Broadway debut in 1997, as Catherine, in a revival of Arthur Miller’s A View from the Bridge opposite veteran actors Anthony LaPaglia and Allison Janney.

Murphy landed her first job in Hollywood when she was thirteen, starring as Brenda Drexell in the series Drexell’s Class. She then went on to play Molly Morgan in the short-lived The Torkelsons spinoff Almost Home. Murphy also guest-starred on several television series, including Parker Lewis Can’t Lose, Blossom, Sea Quest 2032, Murder One and Frasier. She also had recurring roles on Sister, Sister, Party of Five and Boy Meets World.

Murphy’s breakthrough role was in her second feature film, the teen comedy Clueless (1995), directed by Amy Heckerling, which went on to receive cult status. She followed this with roles in Freeway (1996), with Reese Witherspoon and Kiefer Sutherland, and the independent comedy Bongwater (1998). In 1999, she landed a supporting role in James Mangold’s Girl, Interrupted (1999) as a troubled psychiatric patient alongside Winona Ryder and Angelina Jolie; and as an aspiring beauty queen in Drop Dead Gorgeous (1999). She also voiced the character Luanne Platter on Fox’s animated sitcom King of the Hill for the entirety of the show’s run from 1997 to 2009, and Joseph Gribble until the fifth season. She was nominated for an Annie Award for voice acting in theKing of the Hill episode “Movin’ On Up”.

She began in the 2000s with a leading role in Don’t Say a Word (2001) alongside Michael Douglas; the TV adaptation of the novel The Devil’s Arithmetic (2001); 8 Mile (2002), for which she received critical acclaim; and Uptown Girls (2003). In 2003, she starred in the romantic comedies Just Married and Little Black Book (2004) and the critically acclaimed Sin City (2005). Film critic Roger Ebert frequently acclaimed Murphy’s acting talent and comedic timing, giving good reviews to several of her films and comparing her to Lucille Ball:

As for Brittany Murphy, for me, it goes back to the 2003 Independent Spirit Awards [where] Murphy was assigned to present one of the awards. Her task was to read the names of the five nominees, open an envelope, and reveal the name of the winner. This she turned into an opportunity for screwball improvisational comedy, by pretending she could not follow this sequence, not even after the audience shouted instructions and the stage manager came to whisper in her ear not once but twice. There were those in the audience who were dumbfounded by her stupidity. I was dumbfounded by her brilliance.

Murphy followed with several independent films, including as Spun (2002), Neverwas (2005), and Karen Moncrieff’s The Dead Girl (2006), as well as two Edward Burns films: Sidewalks of New York (2001) and The Groomsmen (2006). She returned to voice acting with the critically acclaimed 2006 animated feature Happy Feet, as Gloria Penguin. In 2009, she was cast in the Lifetime TV movie Tribute, as the main character, Cilla. Murphy completed the thriller/drama Abandoned in June 2009 and it was released in 2010, after her death. In November 2009, Murphy left the production of The Caller, which was being filmed in Puerto Rico, and was replaced by Rachelle Lefevre. Murphy denied media reports that she had been fired from the project after being difficult on set, and cited “creative differences”. Something Wicked, her final film, is scheduled to be released in 2014.

Murphy’s career also included work as a singer. She commented: “My singing voice isn’t like my speaking voice…I’ve just always kept it a secret and never taken credit because I wanted to learn how to work behind the microphone in a recording studio, and some of the singers don’t even know it was me recording on their albums.”

She was in a band called Blessed Soul with fellow actor Eric Balfour in the early 1990s. On June 6, 2006, Murphy and Paul Oakenfold released the single “Faster Kill Pussycat”, from the album A Lively Mind. The song became a club hit, and hit number one on Billboard‘s Hot Dance Club Play chart. It also hit number seven in Oakenfold’s native United Kingdom in June 2006.

She dabbled in music again with the release of the film Happy Feet, in which she covered Queen’s “Somebody to Love” and Earth, Wind & Fire’s “Boogie Wonderland”. Murphy said about her character Gloria, “Oddly enough, of all the characters I’ve played, Gloria is the most like me. And she’s a penguin! George Miller always wanted one person to do both [the speaking and the singing]. I said, ‘I can sing,’ and I asked him to give me a shot. I don’t think he took me very seriously because most actors say they can do most things.”

In late 2002, Murphy began dating Ashton Kutcher, her co-star in Just Married. Once engaged to talent manager Jeff Kwatinetz, Murphy became engaged to Joe Macaluso in December 2005, a production assistant she met while working on the film Little Black Book. In August 2006, they ended their engagement. In May 2007, Murphy married British screenwriter Simon Monjack in a private Jewish ceremony in Los Angeles. For the last three and a half years of her life, Murphy, her mother and Monjack lived together in the same house.

In the early 2000s, Murphy lost a large amount of weight, which led to rumors of a cocaine addiction. In 2005, Murphy disputed such claims to Jane magazine, saying, “No, just for the record I have never tried it in my entire life.” At this point, she had recently signed as the spokesmodel for Jordache jeans.

At 08:00 (16:00 GMT) on December 20, 2009, the Los Angeles Fire Department responded to “a medical request” at the Los Angeles home Murphy and Monjack shared. She had apparently collapsed in a bathroom. Firefighters attempted to resuscitate Murphy on the scene. She was transported to Cedars-Sinai Medical Center, where she died at 10:04 after going into cardiac arrest.

Shortly after her death, Assistant Chief Coroner Ed Winter told the Associated Press: “It appears to be natural.” An autopsy was performed the day after she died. Her death certificate listed the cause of death as “deferred”. On February 4, 2010, the Los Angeles County coroner stated that the primary cause of Murphy’s death was pneumonia, with secondary factors of iron-deficiency anemia and multiple drug intoxication. On February 25, 2010, the coroner released a report stating that Murphy had been taking a range of over-the-counter and prescription medications, with the most likely reason being to treat a cold or respiratory infection. These included “elevated levels” of hydrocodone, acetaminophen, L-methamphetamine and chlorpheniramine. All of the drugs were legal and the death was ruled to be an accident, but the report observed: “the possible adverse physiological effects of elevated levels of these medications cannot be discounted, especially in her weakened state.”

On May 23, 2010, her widower Simon Monjack was found dead at the same Hollywood Hills residence. In July 2010, Los Angeles Assistant Chief Coroner Ed Winter stated that the cause of his death was acute pneumonia and severe anemia. It was reported that the Los Angeles County Department of Health had considered toxic mold in their house as a possible cause of the deaths, but this was dismissed by Ed Winter, who stated that there were “no indicators” that mold was a factor. Murphy’s mother Sharon described the reports of mold contributing to the deaths as “absurd” and went on to state that inspecting the home for mold was never requested by the Health Department. In December 2011, Sharon Murphy changed her stance, announcing that toxic mold was indeed what killed her daughter and son-in-law, and filed a lawsuit against the attorneys who represented her in an earlier suit against the builders of the home where her daughter and son-in-law died.

On January 11, 2012, her father Angelo Bertolotti applied to the Superior Court of California requesting that the Los Angeles County Coroner’s Office be required to hand over samples of his daughter’s hair for independent testing. The suit was dismissed on July 19, 2012 after Bertolotti failed to show up to two separate hearings.

In November 2013, Angelo Bertolotti claimed that a toxicology report showed that deliberate poisoning by heavy metals, including antimony and barium, was a possible cause of Brittany Murphy’s death. Sharon Murphy described the claim as “a smear”.