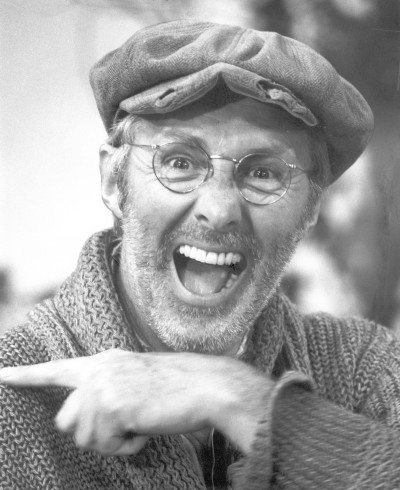 Don Harron’s parents owned and operated Harron’s Cleaners and Dyers in Toronto. Beginning at the age of 10, he earned extra money for the family during the Great Depression, doing “chalk talks” telling humorous stories while drawing caricatures in coloured chalk at company or club banquets, making $10 or $15 a talk. As a result of his performances, Don Harron was invited to audition for, and won, a part in the Canadian Radio Broadcasting Commission radio series Lonesome Trail in 1935. As a teenager, Harron spent time working as a farm hand in rural Ontario; experience he later credited for the development of his Charlie Farquharson character. He graduated from Vaughan Road Collegiate Institute in 1942 and briefly attended the University of Toronto before enlisting in the Royal Canadian Air Force in 1943. After the Second World War, he completed his studies of sociology and philosophy receiving a Bachelor of Arts degree. While at school he performed in amateur and professional productions, won the Victoria College drama award, and composed the music and lyrics for a student musical. He won the gold medal in philosophy and the regent’s silver medal and was offered a position teaching literature at the university which he turned down in order to focus on performing. After university, Harron appeared in a number of plays and revues in Toronto, including the annual Spring Thaw revue, giving him national exposure when the 1952 edition was broadcast on the newly launched CBC Television network. He spent two years in London, England, travelling there variously performing West End production of A Streetcar Named Desire and also working for the BBC as a comedy writer, acing on a radio series, playing the part of a clown in the film The Red Shoes (1948) and writing scripts for Gracie Fields.

Returning to North America in the 1950s, Harron was featured in the inaugural season of the Stratford Shakespeare Festival in Ontario as the male lead in All’s Well That Ends Well and a minor part in Richard III and on Broadway and was one of the writers on the first English-language dramatic series broadcast in Canada, Sunshine Sketches, which aired in 1952-53 on CBC Television. Harron also co-wrote the script for the 1956 television musical Anne of Green Gables. Harron later adapted the production for the stage in 1965 as Anne of Green Gables – The Musical, which continues to be performed annually during the Charlottetown Festival. According to Harron in a 2008 interview with the Calgary Herald, the stage show has provided work for more than 10,000 actors since its inception. Don Harron played Art Harris in the two-part The Outer Limits episode titled “The Inheritors” (1964), the Voyage to the Bottom of the Sea (“Doomsday”, 1965) as the naval missile officer who could not bring himself to perform his duties to launch nuclear missiles as the missile officer aboard the SSRN Seaview, and The Man from U.N.C.L.E. (“The Four-Steps Affair”, also 1965) as an Australian U.N.C.L.E. agent named Kittridge. He guest-starred in the premiere episode of the television series Blue Light (1966), which was later edited together with the three following episodes to create the theatrical film I Deal in Danger. He made one appearance on the CBC Television show Adventures in Rainbow Country in the episode “The Frank Williams File” (1969). He has also been a host and interviewer on Canadian television and radio, hosting CBC Radio’s Morningside from 1977 to 1982, for which he received an ACTRA Award for best radio host, and subsequently hosting an afternoon talk show, The Don Harron Show on CTV from 1983 to 1985. He had a featured role in Arthur Hiller’s film The Hospital (1971), written by Paddy Chayevsky. Harron also appeared on The Red Green Show and replaced Gene Wood as host of the game show Anything You Can Do from 1972 to 1974.

He married his third wife, Canadian singer Catherine McKinnon in 1969. Harron and McKinnon divorced in 2003. He moved in with and later married his fourth wife, Claudette Gareau, who had played the separatist weather girl in Shh! It’s the News (1973) appearing with Harron. Don Harron’s daughter Mary Harron from an earlier marriage to Gloria Fisher, is an independent film director whose credits include I Shot Andy Warhol and American Psycho. Harron died at 90 surrounded by his family in his Toronto home after deciding not to seek treatment for his cancer. His daughter, Martha, told Canadian Press “He was still sharp. He was still capable of being funny even though his voice was barely above a whisper… It’s horribly sad, but it’s beautiful too.”