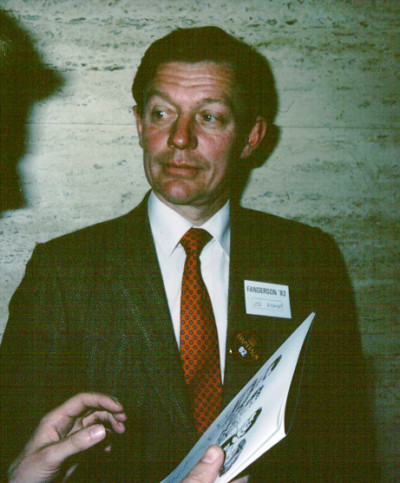 George Victor Bishop was born on 11 June 1932, the son of a Manhattan banker, in Brooklyn, New York. He attended Peekskill High School before a brief spell at teacher training college. Bishop served in the United States Army as a disc jockey with the Armed Forces Radio at St. John’s in Newfoundland where he was introduced to acting with the St. John’s Players. After leaving the army, Bishop enrolled at Boston University where he initially studied business administration but halfway through the course, transferred to drama, much against his parents wishes. After graduating in Theatre Arts, he won a Fulbright Scholarship to study for two years at the London Academy of Music and Dramatic Art, from which he graduated in 1959 and almost immediately found work in the British theatre and film industries. He adopted the stage name “Ed Bishop” at this time to distinguish himself from the established actor “George Bishop”. His first Broadway appearance was as Villebosse in David Merrick’s production of Jean Anouilh’s The Rehearsal in 1963, though he returned to Britain in 1964. Bishop made his film acting debut as an ambulance driver in Stanley Kubrick’s 1962 movie Lolita. He played an American astronaut going to the Moon in the film The Mouse on the Moon (1963) and also appeared in The Bedford Incident (1965) and Battle Beneath the Earth (1967). He also had small roles in the James Bond films You Only Live Twice and Diamonds Are Forever. He appeared in a second Kubrick film, 2001: A Space Odyssey, in which he played the Captain of the Aries 1B Moon shuttle. The role initially featured dialogue, though this was later cut from his scenes.

Bishop appeared in various film and television projects created by producer Gerry Anderson. He provided narration, in addition to the voice of Captain Blue, for Anderson’s Supermarionation puppet series, Captain Scarlet and the Mysterons (1967) and appeared in Anderson’s science-fiction film Doppelgänger (1969). Perhaps his most prominent screen role of all was as Commander Ed Straker in Anderson’s science-fiction series UFO (1970-71). Bishop had his dark hair dyed blond for the role, though he eventually wore a blond wig instead. In later years, he appeared in films such as Twilight’s Last Gleaming, Saturn 3, Silver Dream Racer and The Lords of Discipline. Bishop also provided vocal work for the 1974 animated TV series of Star Trek and appeared as Lieutenant Colonel Harrity in the final episode of the British World War II prisoner-of-war drama Colditz. In the 1980s, he made several appearances on The Kenny Everett Television Show, Whoops Apocalypse (he also appeared in the subsequent film) and had a role in the children’s television series Chocky’s Children.. On radio, in 1977 and 1978 he played the private eye Philip Marlowe in The BBC Presents: Philip Marlowe, adaptations of Raymond Chandler’s stories for the BBC, the last of them, Farewell, My Lovely, produced nearly a decade after the others, as the rights had previously been unavailable. Bishop continued to act on film, TV and radio, usually in British and other European productions, and was a frequent guest at science fiction conventions. Bishop and fellow Anderson actor Shane Rimmer (a Canadian actor who often worked in the UK) often joked about how often their professional paths crossed and termed themselves “Rent-a-yank”. They appeared together as NASA operatives in the opening of You Only Live Twice and as United States Navy sailors in The Bedford Incident, as well as the 1983 film of the Harold Robbins novel The Lonely Lady. In 1989, Bishop was reunited with Rimmer and another Anderson actor, Matt Zimmerman, in the BBC Radio 4 adaptation of Sir Arthur Conan Doyle’s A Study In Scarlet. Bishop and Rimmer also toured together in theatre shows including Death of a Salesman in the 1990s and also appeared in the BBC drama-documentary Hiroshima (2005), one of Bishop’s last TV projects.

In 2000, Bishop briefly reprised the role of Captain Blue in a trailer for the new Captain Scarlet series. He did not, however, reprise the role for the actual series, which would not debut until five years later. In 2002, Bishop recorded a commentary for the DVD release of UFO. In 2003, he performed in the Doctor Who audio drama, Full Fathom Five, produced by Big Finish Productions. Bishop was politically active, participating in the March 2003 UK protest against the Iraq War. Bishop had already showed his disapproval of the military-industrial complex when, in 1993, he gatecrashed an arms-trade fair held in Aldershot, Hampshire whilst dressed to resemble Augusto Pinochet. During the Aldershot protest he met photographer Jane Skinner, who later became his third wife. Bishop died five days after the death of one of his UFO co-stars, Michael Billington. He succumbed to a chest infection contracted while undergoing treatment for leukemia. He is buried in the churchyard of the Parish Church of Saint Lawrence in Napton, Warwickshire, having previously lived there for many years. His grey sandstone tombstone has a peace symbol prominently engraved on it. Its design is very similar to the one situated two metres on the right, which marks the grave of his son Daniel (16 May 1967 – 18 January 1988), who was killed in a car accident in Cumbria. Bishop’s epitaph (from Red River Valley) reads: From This Valley They Say You Are Going. We Shall Miss Your Bright Eyes And Your Smile. He spent the last few years of his life living in West Molesey. His life and work was honoured at the British Academy Television Awards in May 2006. He is survived by his widow and three daughters from his second marriage: Georgina, Jessica and Serina.