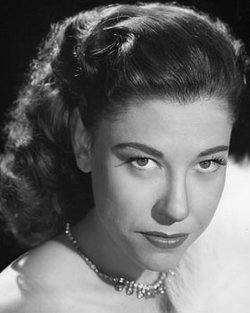 Actress, Singer. For three decades she was a unique persona in the movies and music, a musical comedienne, a yodeling country bumpkin with costumes to match. However, unknown to many she was a recording artist who made hundreds of recordings from the early ’30’s and continued into the end of the ’50’s. She was born Julietta Canova in Starke, Florida to a cotton broker father and a concert-singer mother. When only twelve, Julietta, her sister Annie and older brother Leon (Zeke) were performing together and she adopted the stage name Judy. The trio were called the Three Georgia Crackers appearing on a Jacksonville radio station telling jokes and singing. The depression depleted the family’s income and they relocated to New York City where Judy studied tap-dancing. The trio began getting bookings for nightclub performances in New York City, where Judy yodeled, sang and played the guitar with her brother and sister. She was seen by Rudy Vallee and became a solo hillbilly singer on his radio show. An appearance with her brother and sister in a Hollywood stage revue, culminated in a film contract with Paramount where she made her film debut ‘In Caliente’ followed by ‘The Lady in Red’ and ‘Thrill of a Lifetime.’ She made her Broadway debut in the Ziegfield Follies. A 15 year association with Republic Pictures resulted in a series of country comedies. A few, ‘Sis Hopkins, Sleepy Lagoon, Oklahoma Annie, Joan of Ozark and Chatterbox..’ Judy made 13 movies for Republic, all with her in roles of her trademark hillbilly persona. While a minor star in the film industry, she was a major success in radio. Earlier performances on the Edgar Bergen-Charlie McCarthy show paved the way for her own show, the ‘Judy Canova Radio Show’ which lasted for 12 years where she finished each performance with a trademark signoff ‘Good night, Tweeny.’ (daughter Julietta’s nickname) The show was one of the Top Ten most popular radio show in the country with an estimated 18 million listeners at its peak. Consisting of a mix of country comedy and music, Judy’s program was the forerunner to television series such as ‘The Beverly Hillbillies.’ She pitched in during the World War selling millions in War Bonds while entertaining the troops. Her show produced a number one patriotic hit, ‘Good Night Soldier.’ The era of old-time radio was over and so was her show. She continued her stage career with a primary role in the revival of the musical, ‘no Nanette’. Judy made a few tries into early television but was not successful. Her last attempt was a serious dramatic role, ‘The Adventures of Huckleberry Finn.’ She simply disappeared from the Hollywood scene after that, living comfortably in retirement. Her daughter Diana, born in 1953 emerged as an actress in the late ’70s with appearances on shows like Happy Days then getting starring roles in Soap and I’m a Big Girl now. She lost her fight to cancer and died at her home in Los Angeles at the age of 69. She was cremated and placed in a niche at Forest Lawn which has become in reality a family burial chamber. Her sister Anne and brother Zeke who also became Hollywood show people, occupy the same niche.