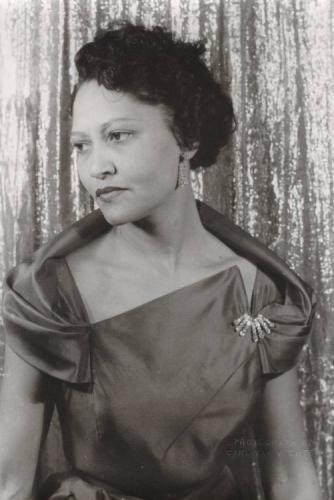 Norman was born Maidie Ruth Gamble on a plantation in Villa Rica, Georgia to Louis and Lila Graham Gamble. She was raised in Lima, Ohio, and began studying drama and performing in Shakespeare plays as a child. She graduated from Central High School in Lima in 1930, and attended Bennett College, where she earned a Bachelor of Arts degree in 1934. She then got her Master’s degree in drama at Columbia University in 1937. She married real-estate broker McHenry Norman on December 22, 1937. She later used her husband’s surname as her professional name. Norman began her career in radio with appearances on The Jack Benny Program and Amos ‘n’ Andy. In 1946, she began studying at the Actors’ Laboratory. Norman made her stage debut as “Honey” in Deep Are the Roots at the Mayan Theater in Los Angeles in 1949. Norman made her film debut in the 1947 film The Peanut Man. She initially found it difficult to portray positive roles in films for African American women and felt limited in playing maids and domestics. While she did appear in such roles, Norman refused to use to play the roles in a subservient or stereotypical manner that was considered the norm. Norman later said, “In the beginning, I made a pledge that I would play no role that deprived black women of their dignity.” In 1951, she appeared in her only leading role in The Well. Norman later appeared in supporting roles in Torch Song (1953), Bright Road (1953), Susan Slept Here (1954), The Opposite Sex (1956), and Written on the Wind (1956). One of her most memorable roles was as the ill-fated housekeeper Elvira Stitt in Robert Aldrich’s 1962 horror film What Ever Happened to Baby Jane?, opposite Bette Davis and Joan Crawford. In a 1995 interview, Norman recalled that the character was originally written as a “doltish, yessum character”. She rewrote the dialogue which she called “old slavery-time talk” in an effort to dignify the character.

During the 1960s and for the remainder of her career, Norman appeared mainly in television roles as she believed there were more opportunities for African American performers in the medium. Her TV credits include appearances in The Loretta Young Show, Perry Mason, Alfred Hitchcock Presents, Ben Casey and Dr. Kildare. In 1961, Norman appeared in the Los Angeles production of A Raisin in the Sun. In the 1970s and 1980s, she guest starred on episodes of Good Times, The Jeffersons, Little House on the Prairie and The Streets of San Francisco. Her last film role was in Terrorist on Trial: The United States vs. Salim Ajami (1988) and that same year she made her last three television appearances in Amen, the television film Side by Side, and an episode of Simon & Simon.

At the height of her career during the 1950s, Norman toured colleges lecturing on African American literature and theater. From 1955 to 1956, she taught at the University of Texas at Tyler. Norman was also an artist-in-residence at Stanford University from 1968 to 1969. In 1970, she created and taught a course in African American theater history at UCLA. It was the first course devoted to the subject of African American studies in the college’s history. Norman taught at UCLA until 1977. UCLA established the Maidie Norman Research Award for the best student essay on African-American film or theater in her honor. On December 22, 1937, she married real estate broker McHenry Norman whom she met while attending Bennett College. They had one son, McHenry Norman III. They were married until McHenry’s death. In 1977, Norman married Weldon D. Canada to whom she remained married until her death. Norman died of lung cancer on May 2, 1998 at her son’s San Jose, California home. Her funeral was held at the Alum Rock United Methodist Church in San Jose on May 12. She is interred at Meadowbrook Memory Gardens in Villa Rica, Georgia.