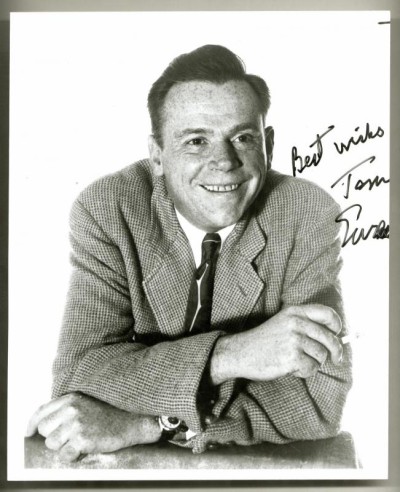 Ewell was born Samuel Yewell Tompkins in Owensboro, Kentucky. His family expected him to follow in their footsteps as lawyers or whiskey and tobacco dealers but Ewell decided to pursue acting instead. Ewell began acting in summer stock in 1928 with Don Ameche, before moving to New York City in 1931. He enrolled in the Actors Studio alongside classmates Montgomery Clift and Karl Malden. He made his Broadway debut in 1934 and his film debut in 1940, and for several years played comic supporting roles. His acting career was interrupted during World War II when he served in the United States Navy.  After World War II, Ewell attracted attention with a strong performance in the film Adam’s Rib (1949) and he began to receive Hollywood roles more frequently. Ewell continued acting in summer stock through the 1940s: He starred opposite June Lockhart in Lawrence Riley’s biographical play Kin Hubbard in 1951, the story of one of America’s greatest humorists and cartoonists. With this play, Ewell also made his debut as a producer. In 1947 he won a Clarence Derwent Award for his portrayal of Fred Taylor in the original Broadway cast of John Loves Mary.  His most successful and arguably most identifiable role came in 1952 when he began the Broadway production of The Seven Year Itch. With Vanessa Brown as “The Girl”, the show ran for almost three years, and Ewell played the part more than 900 times, as he said when he appeared as a mystery guest on What’s My Line? to promote the movie. He won a 1953 Tony Award for this role. He reprised his role in the 1955 film version, with Brown replaced by Marilyn Monroe. The scene of Ewell slyly admiring Monroe as she stood over a subway grate with her skirt billowing has become one of the most iconic moments in film. He won a Golden Globe Award for his performance.

He enjoyed other film successes, including The Lieutenant Wore Skirts with Sheree North and The Girl Can’t Help It (both 1956) opposite Jayne Mansfield. In The Girl Can’t Help It, sultry Julie London appears as a mirage to Tom Miller (Ewell) singing her signature song, Cry Me A River. Ewell played Abel Frake in the 1962 version of the Rodgers and Hammerstein musical State Fair. He co-starred in the U.S. premiere of Waiting for Godot with Bert Lahr in 1956 at the Coconut Grove Playhouse in Miami, Florida. However, as his film and theater careers seemed to have reached their peaks, he turned his attention to television. Over several years he played guest roles in numerous series, and received an Emmy Award nomination for his continuing role in the television series Baretta, with Ewell commenting that working on that series had given him greater pleasure than any project he had ever worked on. In 1982 he co-starred as the drunken town doctor in the short lived comedy Best of the West. His final acting performance was in a 1986 episode of Murder, She Wrote.  In a 1983 interview, Ewell stated that the theater was the only arena in which actors could be creative, because films were the work of directors, and television was the work of technicians. He said he did not hold any particular regard for any of his films, with the exception of The Seven Year Itch. He also spoke highly of his co-star Monroe, saying that he “adored” her and that she was “such a lovely person to work with”. He claimed never to have seen any of his films, including The Seven Year Itch, and had only ever seen glimpses of himself onscreen when his wife was watching television. He said he suffered from an inferiority complex and could not bear to see himself on screen as he was too critical of himself.

From September 1960 to May 1961, Ewell starred in his own television series, in the self-titled The Tom Ewell Show, which lasted for one season. In the mid-1970s, Ewell enjoyed popular success with a recurring role as retired veteran policeman ‘Billy Truman’ in the 1970s Emmy-winning TV series Baretta. Ewell appeared in three dozen episodes of the TV-cop series, which starred Robert Blake as Detective Tony Baretta, until its end in 1978. In 1979, he was a guest star on the TV series Taxi. Ewell also co-starred from 1981-1982 in the short-lived TV series Best of the West.  On March 18, 1946, he married Ann Abbott, daughter of Broadway director George Abbott; the short-lived marriage ended in divorce a year later. Ewell then married Marjorie Sanborn on May 5, 1948, producing a son, Taylor.  On September 12, 1994, Tom Ewell died of undisclosed causes, aged 85, at the Motion Picture Country House and Hospital in Woodland Hills, California. His widow said that Ewell had suffered a long series of illnesses. Ewell was also survived by his son, Taylor, and by his 105 year old mother, Martine Tompkins (February 17, 1889 – March 6, 1998),[4] who lived in Curdsville, Kentucky where she died in 1998 at age 109.