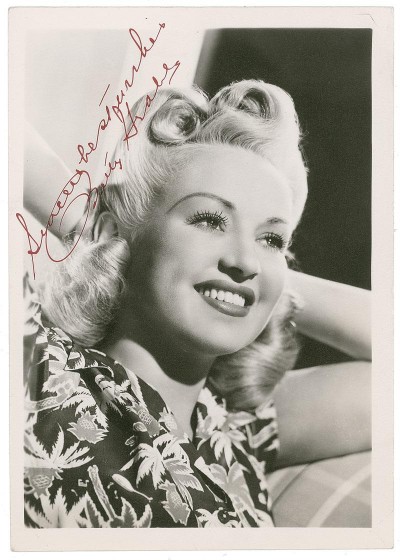 During her lifetime, she would become one of the most prolific singing actresses of her time, starring in over one hundred films, including ‘Pin Up Girl’ and ‘How To Marry A Millionaire’.

In 1929, the Grable family went on holiday to California, and Lilian, Betty’s Mother, decided that she and her daughter should stay behind, in order to enhance Betty’s chance of fame.

Grable attended the Hollywood Professional School, dance lessons at the Ernest Blecher Academy, and was coached at the Albertina Rosch School.

At 13, Betty was chosen for the chorus in ‘Let’s Go Places’. The law at the time stated that girls had to be over 15 to dance in the chorus, but Betty possessed forged documentation to say that she was old enough to perform. In her next show, however, her true age was discovered, and her contract duly terminated.

In 1930, Sam Goldwyn signed Betty to appear in ‘Whoopee!’ and this was followed by numerous chorus and bit parts, including two films starring Ginger Rogers and Fred Astaire.

Betty Grable met her first husband in 1935. His name was Jackie Coogan and he had been a child star. Together, he and Betty went on tour with their show ‘Hollywood Secrets’, and it was this venture that really made a name for her.

Grable spent World War II entertaining the troops. An iconic photo of Grable in a bathing suit made her a pin up at this time. It was later printed in LIFE magazine. She and Jackie divorced in 1940, following arguments over money.

In 1943, Twentieth Century Fox had Grable’s legs insured with Lloyd’s of London for the record amount of $1.25 million.

By 1947, Grable was the highest paid actress in the US, earning about $300,000 per year – a phenomenal amount for that time. She also made the film for which she was most praised – ‘Mother Wore Tights’.

Her last film was ‘How to be very, very popular’ in 1955. Grable then spent the late 50s and 60s performing on TV and in nightclubs, as well as appearing in ‘Guys and Dolls’.

In 1965, she divorced her second husband James. Betty Grable discovered she had lung cancer in 1972, and died from the disease a year later.

In 2009, she was inducted into the Missourian Hall of Fame.

She had been one of the most universally known stars in the 1940s and was the archetypal pin-up. Her life was free of scandal and in reality she cared for her family and personal life more than her fame, making her a Hollywood legend.

Grable had several nicknames during her career including ‘The girl with the million dollar legs’, ‘the quick-silver blonde’, ‘the queen of the Hollywood musical’ and ‘the darling of the 40s’.