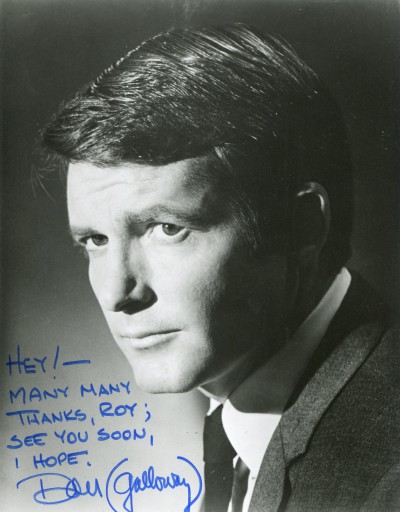 Galloway was born in Brooksville, Kentucky, the son of Malee (Poe) and Paul Smith Galloway, a contractor. Galloway began his television career in 1962 in the New York-based soap opera The Secret Storm as the first actor to play Kip Rysdale. His first nighttime video stint was on Tom, Dick and Mary, one-third of the 90-minute weekly sitcom 90 Bristol Court, in 1964. He signed up with Universal Studios in 1963 and guest-starred on shows like Wagon Train, Run for Your Life, among many others. Those led him to a co-starring role opposite Raymond Burr on Ironside, as Det. Sgt. Ed Brown. During the sixth season of Ironside, he and Burr co-starred in the TV Movie Portrait: A Man Whose Name Was John. Galloway stayed through the entire run of Ironside until its cancellation in 1975. He was reunited with Burr on two of his mentor’s 25 Perry Mason television movies before reprising his role on Return to Ironside in 1993. In 1979, Galloway hosted a syndicated game show called The Guinness Game, which was produced by Bob Eubanks. Galloway made a few appearances on the popular game show Match Game as well. In 1983, he appeared in the movie The Big Chill as the husband of the character played by Jobeth Williams. In 1985, Galloway joined the cast of the ABC soap opera General Hospital, playing Buzz Stryker until 1987. For a time after his acting career, Galloway resided in Hooksett, New Hampshire and wrote a column for the Manchester Union Leader newspaper, espousing his Libertarian political views. Galloway died at age 71 at the Renown Regional Medical Center in Reno, Nevada, after suffering a stroke two weeks earlier.