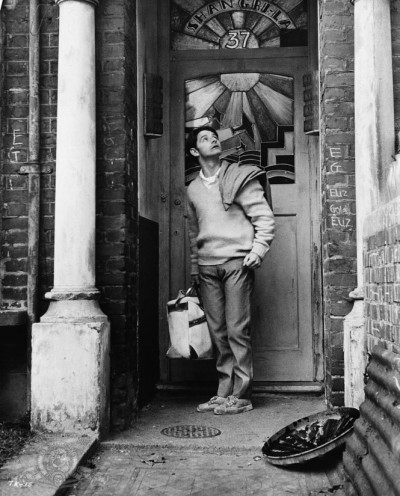 He was born in Bradford, Yorkshire, England, but brought up in Dublin, Ireland. His father James was a doctor from County Tyrone, and his mother Nora O’Connor was a teacher from Kerry. Donal Donnelly attended school at Synge Street Christian Brothers School in Dublin where he acted in school plays with Milo O’Shea, Eamonn Andrews, Jack McGowran, Bernard Frawley (Seattle Repertory Co.) and Jimmy Fitzsimons (brother of Maureen O’Hara), under the direction of famous elocution teacher, Ena Burke. Donnelly toured with Anew McMaster’s Irish repertory company before moving to England where he starred with Rita Tushingham in the film The Knack …and How to Get It. His breakthrough role came when he was cast as Gar Private in the world premiere of Brian Friel’s Philadelphia, Here I Come! directed by Hilton Edwards for the Gate Theatre at the Dublin Theatre Festival in 1964. The production subsequently transferred to Broadway where it played for over 300 performances and established Donnelly and Patrick Bedford – who played his alter-ego Gar Public – as formidable new talents to be reckoned with. They were jointly nominated for the Tony Award for Best Performance by a Leading Actor in a Play in 1966. Donnelly returned to Broadway a number of times, replacing Albert Finney in A Day in the Death of Joe Egg in 1968, playing Milo Tindle in Anthony Shaffer’s Sleuth and appearing as Frederick Treves opposite David Bowie as The Elephant Man. He also renewed his relationship with Brian Friel, appearing in the world premieres of Volunteers at the Abbey Theatre in 1975 and Faith Healer with James Mason (Longacre Theatre, NYC) in 1979 as well as the Broadway premieres of Dancing at Lughnasa in 1991 and Translations in 1995.

For many years, he toured a one-man performance of the writings of George Bernard Shaw, adapted and directed by Michael Voysey and entitled My Astonishing Self. His film roles included Archbishop Gilday in The Godfather Part III and he gained particular acclaim for his performance as Freddy Malins in John Huston’s final work The Dead based on the short story by James Joyce. On television, he played the lead role of Matthew Browne in the 1970s ITV sitcom Yes Honestly, opposite Liza Goddard. But from the late 1950s onwards, he often appeared in such British TV programs as “The Avengers”, “Z Cars” and “The Wednesday Play”. He died in Chicago, Illinois, on 4 January 2010 from cancer, aged 78, and is survived by his wife, Patricia ‘Patsy’ Porter – a former dancer he met working on Finian’s Rainbow, and two sons, Jonathan and Damian. His daughter Maryanne predeceased him.